NextLeveraging Pinterest To Generate Maximum Traffic To Your Site
eCommerce

Why Typos Kill Sales: 4 Proofreading and Editing Tips for Websites 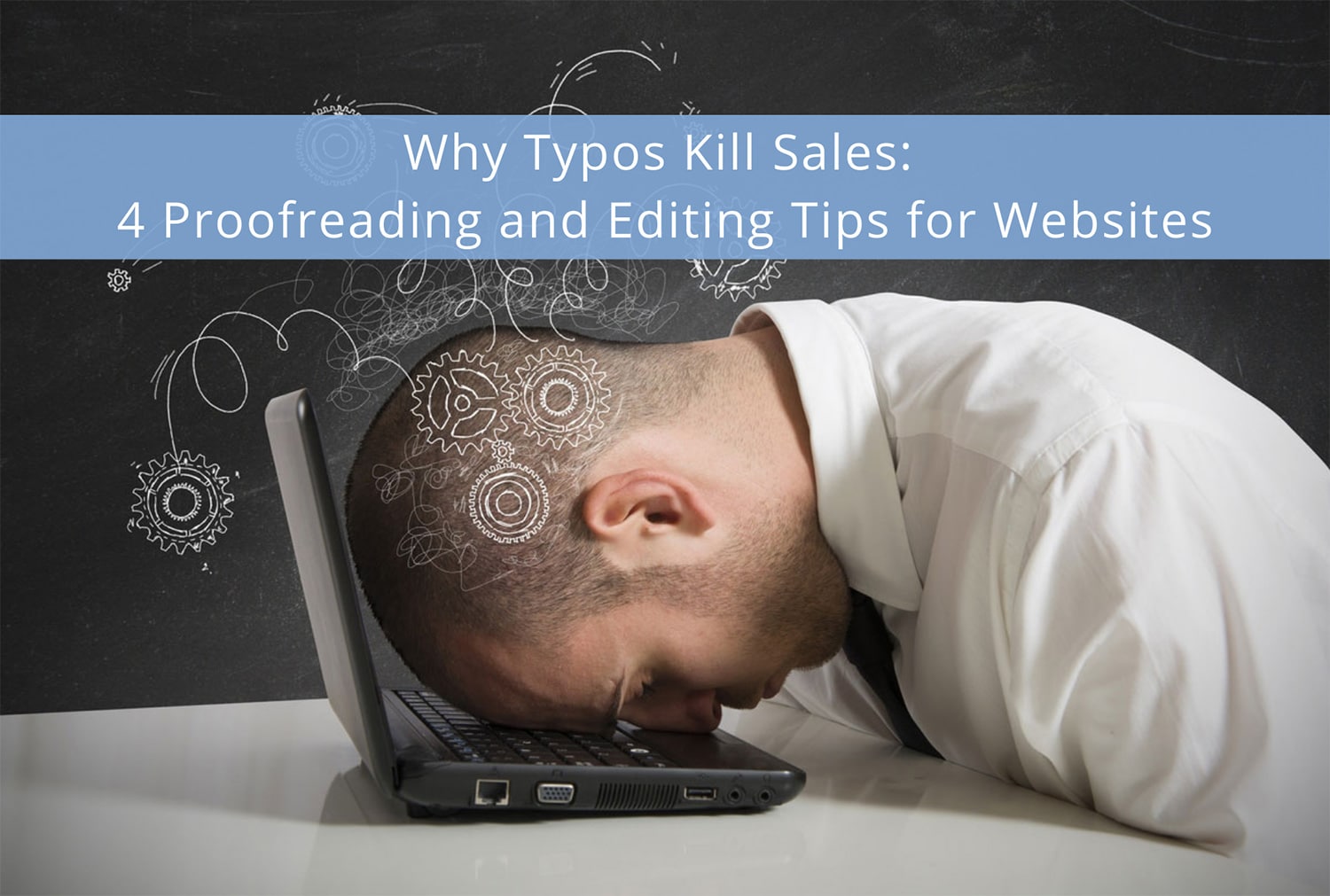 I’ll admit it… I’m great at spotting other people’s typos.

Not so great at finding my own. That’s why when Marcia Yudkin told me about the simple proofreading and editing tips you or your team can use to halt proofing errors, I was excited to pass them along. Her expertise is sure to make your life easier!

With the timeless style and contemporary fit of our GT34L Irish fishreman’s sweater, you’ll feel like you can conker the world!  [Details]

Chances are, you’ve seen such bloopers while you were shopping online.  They tend to be more glaring to you when you encounter them on other companies’ websites than on your own.  But whether they just barely register with you or cause you to roll your eyes, from a business standpoint typos are a shopper distraction you can’t afford.  They damage your company’s credibility and throw a monkey wrench into what should be a smooth selling process.

Every ecommerce site needs a process devoted to reducing mistakes to as few as possible.  That way, the intrinsic appeal of what you’re selling comes through to the reader.  Without bloopers breaking the spell, users remain entranced from beginning to end.  They have a more pleasurable and successful shopping experience.

What the Research Says

In a UK survey of 1,029 adults by the company Global Lingo, 59 percent said bad grammar or misspellings stop them from buying from a website.  Why?  Most replied that they wouldn’t trust a company making such mistakes to provide quality service.  Others said they were put off by the carelessness or unprofessionalism involved.

The same survey asked consumers whether they’d ever come across a website that seemed to have been translated badly into English from a foreign language, and 31 percent said yes.  Of those, only 4 percent said they had continued to use the website or buy from it.

When SurveyMonkey asked a representative sample of 1,042 US adults questions about the impact of typos, 81 percent of women and 77 percent of men said they were less likely to buy something advertised with spelling or grammar mistakes.  Surprisingly, Millennials in this survey were more harsh on mistakes than older adults, as were consumers with a higher household income.

When you consider the degree of trust that consumers need to have to buy from an unknown company online, where they can’t touch the merchandise or discuss it face to face with a sales person, these findings make sense.  People figure that if a company is sloppy with spelling or other details, maybe their products are shoddy, too.  And how can you trust that kind of company to send what was ordered and to live up to promises made on the website?

Indeed, many governmental agencies advise consumers to assess mistakes in spelling, grammar or other elements in emails or on websites as an important sign of a possible scam.

The blurb in italics at the start of this post actually contains four types of typos, each with a distinctive kind of impact.  First, you probably noticed that what was supposed to be “fisherman’s” appeared as “fishreman’s.”  That undoubtedly came about from someone’s slip of the fingers while typing, and readers realize that.  The fault here is not in making the mistake, but in failing to catch and correct it.

The second mistake was “conker” instead of “conquer.”  This type of mistake doesn’t come about from inaccurate typing.  Instead, it indicates a weak grasp of written English.  To literate people, it implies a lack of competence on the part of the person who wrote it, of the supervisor who didn’t correct it, and of the company for giving people with poor language skills responsibility for writing.  Certain grammatical mistakes, such as “it’s” instead of “its,” “you’re” instead of “your” or improper plurals like “two blouse’s,” fall into this category.

The third mistake, hard to see but perhaps even more consequential than the first two, is that the item number “GT34L” should have been “GT43L.”  When uncaught, this type of glitch could thwart searches on the website, delay orders and cause a different product to be shipped.  A mistake like this that the average person wouldn’t notice once caused a colossal loss for an eBay seller, who listed a rare bottle of vintage ale with a close but erroneous spelling of the brand name – “Allsop’s” instead of “Allsopp’s.”  The ale bottle sold for $304, but when the buyer relisted it on eBay with the correct spelling, the item came to the attention of collectors, and it resold for more than half a million dollars.

The fourth mistake, also hard to pick out on sight, is that the “Details” link is incorrect. Clicking it brings up the details for a child’s pair of shoes, not for the Irish fisherman’s sweater.  That’s bound to annoy and frustrate any shopper who encounters it.  Besides faulty links, I would classify wrong telephone numbers on the website in this category.  LL Bean once experienced a massive problem when its employee “knew” (without checking) that the “877” reply number in its print catalog should have been “800.”  The company was able to receive calls from the catalog only by paying the company that owned the corresponding 877 number an undisclosed sum of money.

By now, you may be wondering what automated tool or app I’m going to recommend to prevent such glitches.  Unfortunately, no all-powerful proofreading tool exists.  Writing trainer Lynn Gaertner-Johnston once tested the most highly rated grammar check software and found scads of supposed errors it flagged that weren’t mistakes at all, along with other actual goofs that slipped through its net. Ecommerce sites tend to have specialized wording and terms that software doesn’t deal well with.  You definitely can’t depend on autocorrect or spellcheck tools built into other programs to find and fix typos.

So your typo prevention strategy ought to begin with giving the right person (or people) responsibility for proofreading and editing.  Don’t presume it would be someone with an English degree!  It also might not be your most talented copywriter.  Instead, it might be a coder or someone in the mail room or accounting who has a natural knack for spotting mistakes.  Coworkers tend to know who has that ability, so ask around.  If you don’t have someone on staff who’s already good at finding errors, then choose someone who appreciates details and get them trained.

Effective goof-proofing tactics involve tricking the mind to see what’s actually on the page or the screen instead of guessing what the text probably says, which is what we all do when we read quickly.  One method is printing out the copy, then using a pen to point word by word in order to find mistakes, including missing words or duplicate text like “the the.”  On screen, you or your proofreader can achieve the same effect by using the cursor to go along slowly.  Another on-screen method is temporarily enlarging the text to, for instance, 36 points, which makes it easier to check word for word and to spot incorrect punctuation.

In addition, you should create a checklist for proofreading and editing that’s customized for your subject matter and online format.  This needs to include verifying stock numbers and other technical details, so as to catch GT34L/GT43L-type errors.  You/your proofreader must also click on every hyperlink to make sure those are correct.

Allow time in the publication process for proper proofreading, and make it known that a mistake-proof website is a company priority.  The same goes for emails to customers and posts on Instagram, Facebook, Twitter and the company blog.  When a shopper, media person or product reviewer writes about a mistake, don’t just shrug or allow it.  Have a process to correct it as quickly as possible.

If it doesn’t seem practical to delegate proofreading and editing to a designated person or squad, then an alternative is to train everyone who writes anything for the company in proofreading strategies and to include goof-proofing as a factor they are evaluated on.  In such a situation, you can encourage people to buddy up and find a proofreading partner, because it’s always easier to serve as the “final pair of eyes” for someone else than for yourself.

Because certain situations are tailor-made to generate howlers, educate staff to be extra careful in those.  Headlines or subject lines often get added or changed apart from the regular writing process, so they need special scrutiny.  Last-minute changes are another notorious trouble spot, where a change in one sentence causes something else in the copy to no longer make sense.  There’s also the problem of having an excellent proofreading process until someone high up in the company thinks they know better and tweaks what was correct into something wrong.

One CEO – Garrett Moon of CoSchedule – has called concern with typos “ego-driven posturing.”  He proudly said his company has more important things to worry about.  Yet in ecommerce, countless seemingly little details matter a lot because they account for the difference between confusion and chaos on the one hand and on the other hand, buyers understanding what’s on offer and receiving what they ordered on time.  Typos get in the way of a smooth customer experience, and that’s why every ecommerce company needs an effective system for keeping them at bay.  Use the suggestions in this post to set up a typo prevention system that works for your company.

Learn more about the best methods for finding and correcting written mistakes in Marcia’s practical on-demand online course, “Proofreading Hacks: How to Catch Those Pesky Typos Time After Time.”

Marcia Yudkin is a marketing and publishing expert with nearly 40 years of experience working with small businesses, mid-sized companies and authors on their writing.  Her 17 books include 6 Steps to Free Publicity, Persuading People to Buy and Meatier Marketing Copy.

Have questions about proofreading? Talk to me below!

23 Tools For Bloggers: Resources To Write Faster & Grow Your Blog