Yesmin O’Brien is a professional hairdresser that has an impressive record over the past 30 years styling hair for fashion shows such as Donna Karan and Victoria Beckham, at London, Paris, Milan and New York fashion weeks. Yesmin regularly works on photo shoots and events like Nelson Mandela’s 90th Birthday Concert in Hyde Park. Along with a celebrity clientele that Yesmin protects with great discretion, she also offers her expert salon styling services to the public through the seanhanna salon based in Sutton, Surrey.

“It was important to me that Yesminobrien.co.uk complimented my portfolio and allowed the images to take centre stage” said Yesmin O’Brien, “I’m so pleased with the website ThoughtShift produced, it’s easy to navigate with a classic style that lets my work speak for itself.” 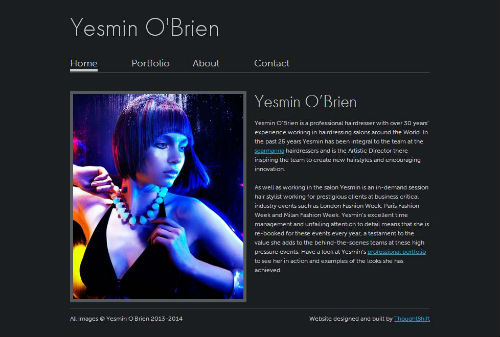 “The Yesmin O’Brien site was designed as a bespoke template on the WordPress platform to enable Yesmin to update the content easily whilst still having a completely unique look,” said Helen Trendell, Managing Director and Co-Founder of ThoughtShift. She continued, “The website officially launched in January 2014 offering Yesmin’s services to the public and displaying her vast portfolio of work.”