This Brand Knows Why Not Every LGBTQ Customer Wants a Rainbow 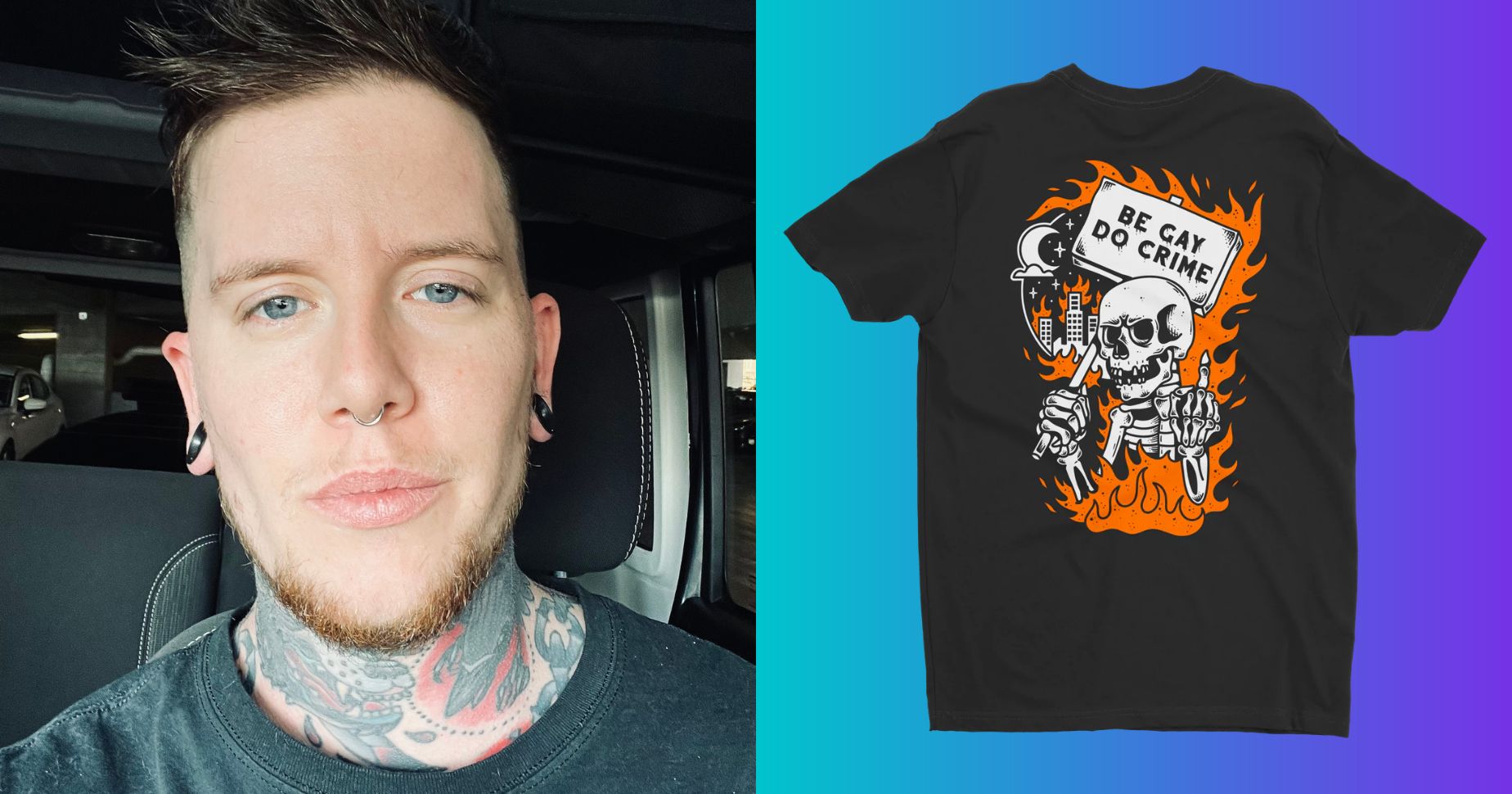 During Pride Month, you can’t miss them: rainbow visors, rainbow shoelaces, rainbow coffee filters, rainbows slapped on nearly every item you can think of. And while flying the rainbow flag can be a way for individuals and businesses to show support for Pride, it’s not for every LGBTQ customer.

Awarewolf is an LGBTQ apparel and accessories brand owned by Landon Reed. He started the business seven years ago with printed t-shirts, as a way to raise money to get top surgery. After completing that goal, he kept at it, expanding the brand and its offerings to what it is today. Awarewolf offers graphic tees, outerwear, shorts, and accessories like pins and patches.

Reed wanted to offer LGBTQ goods with a more subtle twist. While some shirts, for example, have straightforward queer or trans slogans, others rely LGBTQ culture in-jokes or other inconspicuous signals. It’s a powerful counter to the rainbow-washing that feels ubiquitous this time of year. Landon’s designs mean a lot to those who want to wear their pride but don’t feel safe being fully out, or who simply don’t want the usual corporate rainbow-filled look.

That’s why Landon offers items like the “Shapeshifter” shirt or these “Love is Love” swim shorts. Alongside them are more direct designs, like the “Everyone is a Little Queer” shirt or this “Gay Agenda” sticker. Landon also carries gender-affirming wear, like these packing briefs. Awarewolf’s vibe is an edgier sort of Pride that LGBTQ can wear to signal their identity to fellow queer and trans folks.

Shopify talked to Landon about being an LGBTQ entrepreneur, serving his community, and how to support LGBTQ businesses beyond Pride Month.

Shopify: Around Pride Month you see a lot of brands just slap a bunch of rainbows or pronouns onto things like a t-shirt or mug. But what do people actually want?

Landon: I just think that queer people want to support other queer people. Really, I think that’s what it comes down to. I come out with a different twist than those corporate people would see it because they don’t know the ins and outs of it like a queer person would. They might not know know the “lesbian U-Haul joke,” for example. I think queer people, overall, they just want stuff from queer people, because we get it.

Shopify: You often talk about community. What is most gratifying about serving your own community?

Landon: Oh, completely. I get messages all the time, especially from transmasc men, that just feel so validated. Just simply because it’s queer clothing that you can wear that’s not all in your face or it’s more subtle, or just more of their style. Not so corporate cliché, but has more of a grungy feel. Just that alone makes me so happy. It brings me so much joy that it makes me really happy to do what I get to do.

Shopify: You talk about how your designs are a little more subtle, a little more discrete. Why is that important for some customers?

Landon: It is important for people just for safety reasons. They might live in a small town and the second someone sees a rainbow they might face harassment. But how I try to do things is, say you’re a queer person in Walmart. We’re both in Walmart. I know what you’re wearing. But maybe somebody else doesn’t. And I think that sense of discretion is great, because it can still keep you within your community without being a billboard for it.

With time, that awareness has grown. It’s almost got to a point where I don’t even have to put something queer on a shirt. Just the fact that it’s saying “Awarewolf” at this point creates visibility while still being invisible at the same time.

Shopify: Have you gotten feedback from customers about that subtlety?

Landon: On Tumblr I have had people, whether it’s, like, making posts themselves or messaging me, just sharing their gratitude. Like, “I don’t get this anywhere else.” “Thank you for even having the option.” And I always remember, because it’s really what rooted my brand.

Shopify: During Pride Month, more attention is paid to LGBTQ businesses, but how can we support LGBTQ entrepreneurs the whole year?

Landon: Easily, honestly. Following them on Instagram, sharing posts, just telling them what you think about their stuff. Those small things can literally go so far. And even without purchasing, as cliché as it sounds, it’s the thought that counts. It helps push us to keep going.