NextBusiness Proposals: How to Write One and Where to Find Templates and Examples
eCommerce

Entrepreneurship for Everyone: Martha Stewart Shares Her Blueprint for Success

Picture it: a crisp winter evening in New York’s fabled SoHo neighborhood. And on this particular December evening, Shopify’s 8,000-square-foot space on Greene Street was abuzz with more than 200 entrepreneurs who gathered to mingle, make merry, and talk shop.

For a community so often working in isolation—and during a time of unprecedented aloneness—the party was a rare occasion to gather and indulge. The chatter of bonhomie (and the scent of aromatic candles) filled the space. But the evening’s draw was about more than an opportunity to connect: these business owners were here to learn from the best.

Down a flight of stairs, an evergreen-boughed stage featured two empty chairs. Shopify President Harley Finkelstein was co-hosting the evening with Martha Stewart, the Patron Saint of Entrepreneurs. Finkelstein, an accomplished entrepreneur and established voice in the business of business, brought a unique perspective as Stewart’s interlocutor.

“This is not just the year of the entrepreneur—this is the start of a new era where being an entrepreneur is people’s first choice for a career,” he recently commented, following the revelation that ‘how to start a business’ dominated Google search trends over ‘how to get a job.’ 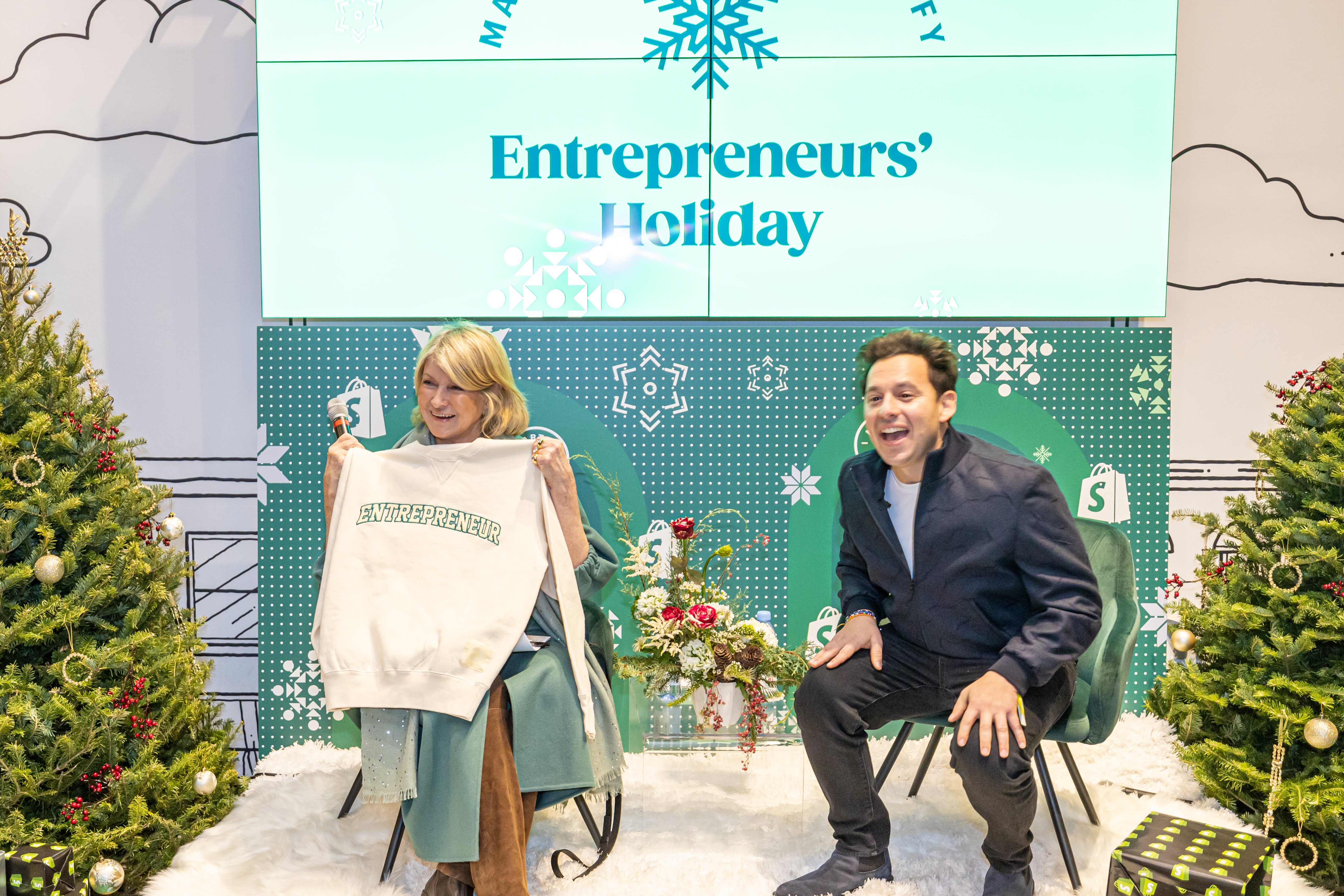 Stewart took the stage in a holly green wrap dress and after a warm, almost rapturous, welcome, she got right down to business. “Being an entrepreneur is hard work. It takes a tremendous amount of sleepless nights,” she said, “and yet when success happens it is so inspiring and so self-enhancing that you want to keep going.” Stewart should know. An entrepreneur from childhood (she started her first party planning business when she was only nine), she grew a modest catering company into a vast media empire, becoming a lifestyle and business icon.

In a lively discussion with Finkelstein, she shared her experience and advice on starting, building, and maintaining a business. Here, she shares what it takes to find success—and how rewarding it can be to support others in their pursuits, too.

Your first business isn’t always your best business—don’t be afraid to try something new.

Though Stewart’s business empire now encompasses everything from NFTs and CBD to Dutch ovens and Christmas trees, her path to the top wasn’t straight. “Every seven years I metamorphosed into a different business,” she said, ranging from model to stockbroker to caterer and gourmet food store manager. Then, in 1982, she hit her stride.

“I finally found my voice writing books,” Stewart recalled. Finding her voice in writing soon cascaded into other ventures. “The book gave me the idea for the magazine [Martha Stewart Living] which grew to encompass a media brand [Martha Stewart Omnimedia] and then, because you could whet the appetites of many people—and those people want the same product you’re using—I started making products as well. That’s when the business really took off.” The takeaway for the audience was clear: success doesn’t often come by luck or chance, but from hard work, remaining curious, and never being afraid to try something new.

“Need” and “want” are the two most important words in business.

Stewart believes the secret to entrepreneurship is actually simple. She boils down the fundamentals to two simple words: need and want. She said: “Does the customer need it? Does the customer want it? If the business or product idea answers yes to either of those two questions, you’re probably onto something that will be successful.” 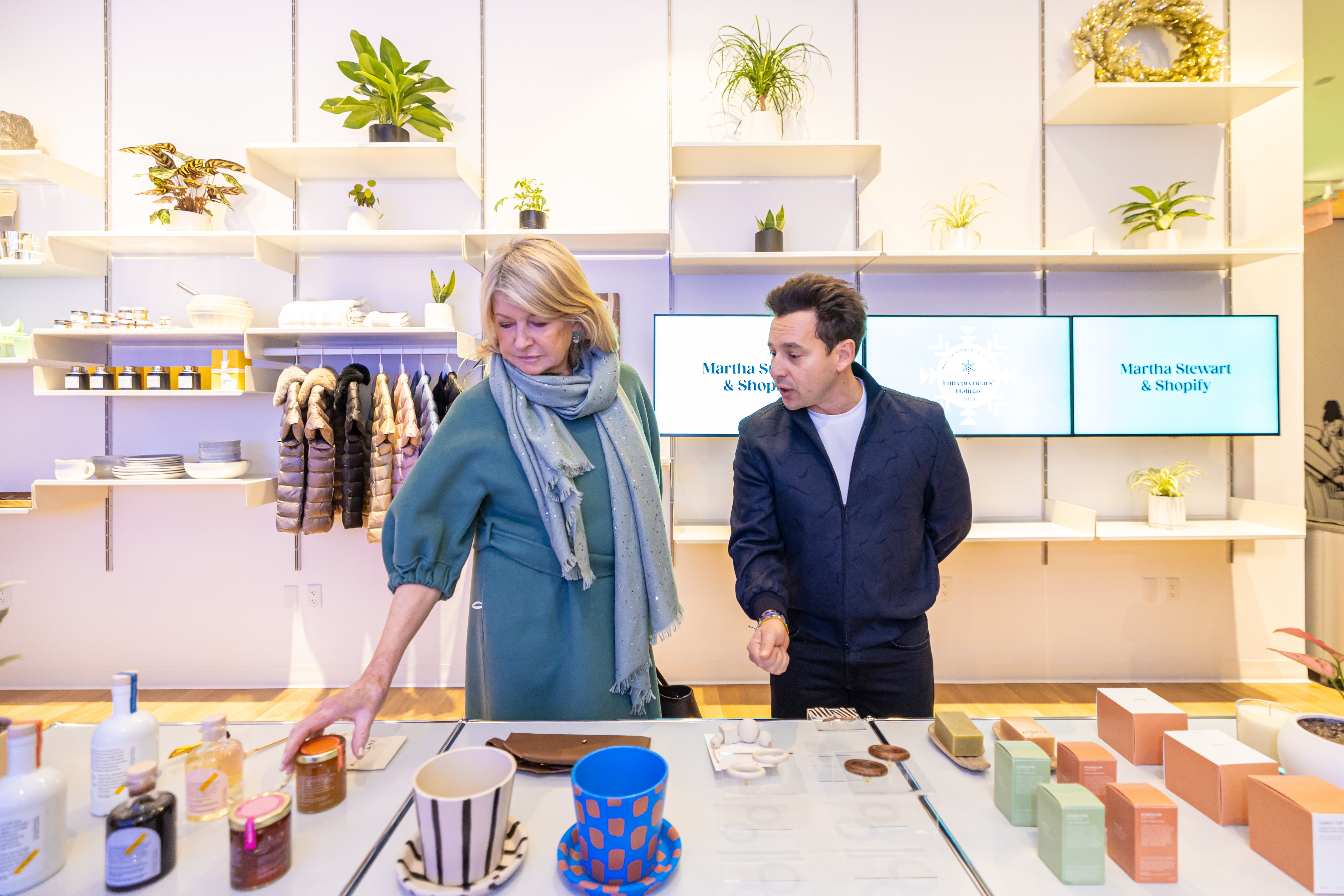 Stewart deployed this philosophy in her own unique approach to business: she created a lifestyle that customers wanted, built a brand around their aspirations, then offered everyday products that facilitated those needs—like premium bedsheets or curated meal kits.

Starting a business isn’t just about the product. There’s the marketing, the packaging, the P&L, the funding, the logistics, the distribution, and much, much more that occupies the mind. But fundamentally, the product is key. So for Stewart, whose empire is built on her image as the ultimate homemaker, she couldn’t fake it. Nor did she want to.

But of course, sometimes observing is also doing. When Stewart wanted to learn how to make sushi, for example, she called up the world-famous Nobu Matsuhisa of Nobu to learn. “It took me a few years to get a sushi coat from Nobu but I finally did.”

Finkelstein leaned into levity, musing with a laugh: “Well, we can’t all call up Nobu, but we do live in such a connected world, if you want to learn something and there is someone out there, simply get in touch and say, ‘Do you mind if I shadow you for a few hours?’”

It’s safe to say that Stewart’s own social media footprint is probably larger than the entire crowd’s combined. So how did Stewart, who began her career when there was no such thing as social media, become a social media star? “Don’t be fluff,” she said.

In early October, for example, the world was treated to Stewart’s TikTok debut, in which she demonstrated the proper method of eating soufflé. The short clip had all of the elements that made Stewart an icon: her effortless sophistication paired with her approachable guidance that makes people believe they can live their lives just as she lives hers. “We got 6.7 million views,” said Stewart proudly. “Inspire, inform, and teach. Then you’ll get some followers. Then you’ll get some investors.”

The key to building a self-sustaining organization, according to Stewart, is hiring people with passion not just for business or success but for the specific intricacies of your business.

And, says Stewart, don’t be afraid to put your hires on the spot. “We have a test I call the 5 T’s,” she said. “It is ‘Explain the differences between etoile, toil, tool, toll, and tuile.’” Beyond that, said Stewart, she looks to recruit the best she can find in any field, whether it is as general counsel, or product development, or finance. The key, she said, is that they are as driven as you are.

…and then let them go.

Stewart’s far-reaching impact is partially thanks to the thousands of people who have worked for her, learned from her, then gone on to start their own endeavors. This group, which Finkelstein amiably referred to as the “Martha Mafia,” has carried forth her brand’s DNA into myriad new projects. 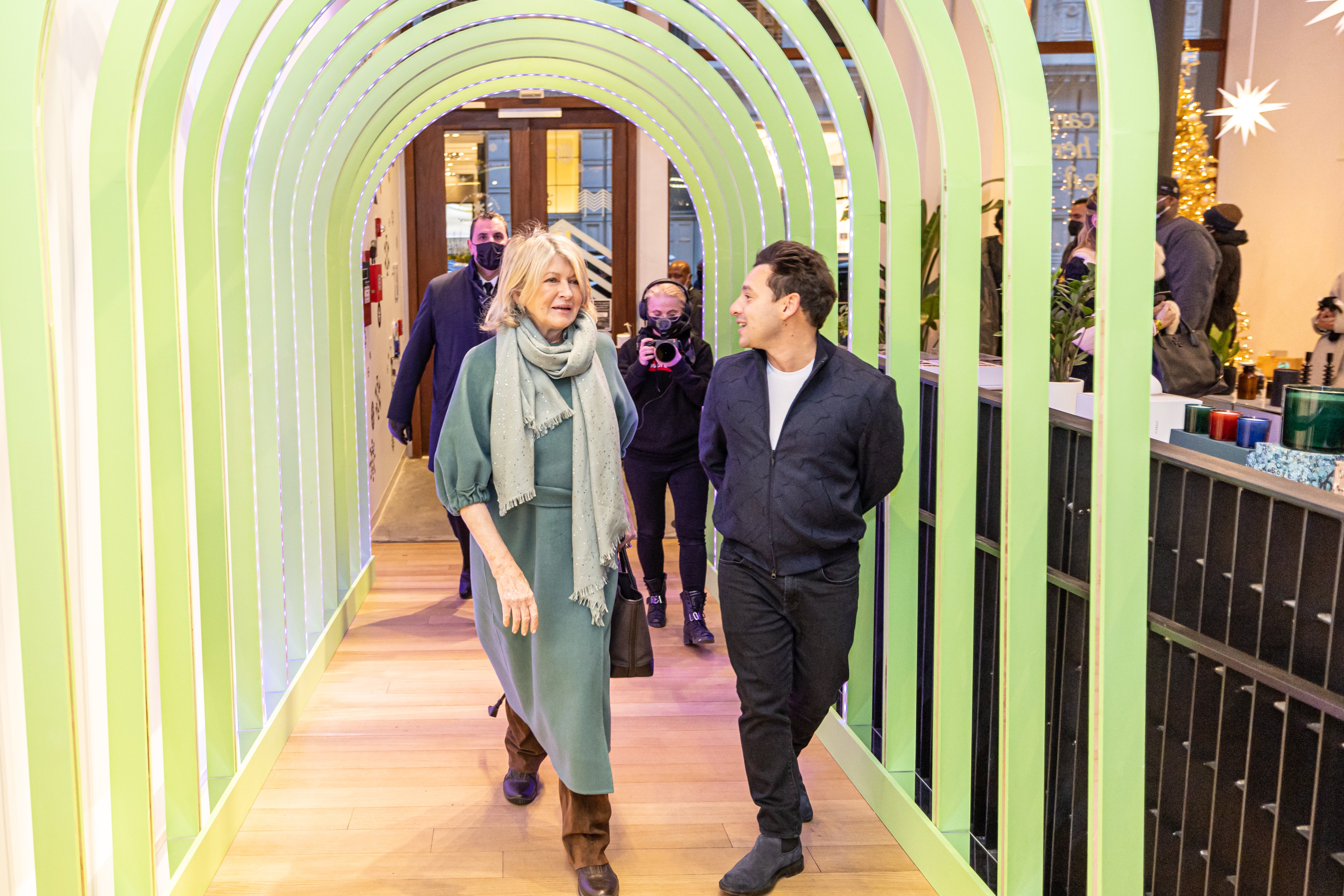 Stewart, who has a forthcoming podcast devoted to speaking to former employees, recalled that her former general counsel, Greg Blatt, became the CEO of Match.com and then went on to run IAC, a large media holding company. She listed other alumni who have since gone on to found businesses, from Mast Brothers, artisanal chocolate makers, to Purl Soho, a knitting store.

“I’m very proud of them. They had an idea and they left the company. They’re cashing in now,” Stewart said. “And that’s a good thing.”