How to Save Entrepreneurship

Despite startup culture gaining visibility from hoodie-wearing CEOs, until recently, entrepreneurship had been declining for decades. The number of new businesses in America fell by nearly half from 1978 to 2019, according to the Brookings Institution. Almost all industrialized countries saw similar declines. The Fraser Institute compared 2001-07 with 2008-14 and found that startup creation dropped by 18.6% in America, 20.3% in Australia, 8.5% in Canada and 7.5% in Britain.

Since COVID, we’ve watched a remarkable surge in new business formations that has held in 2021. In July 2020 alone, over 500K new businesses were created—nearly double the year prior. This is encouraging. 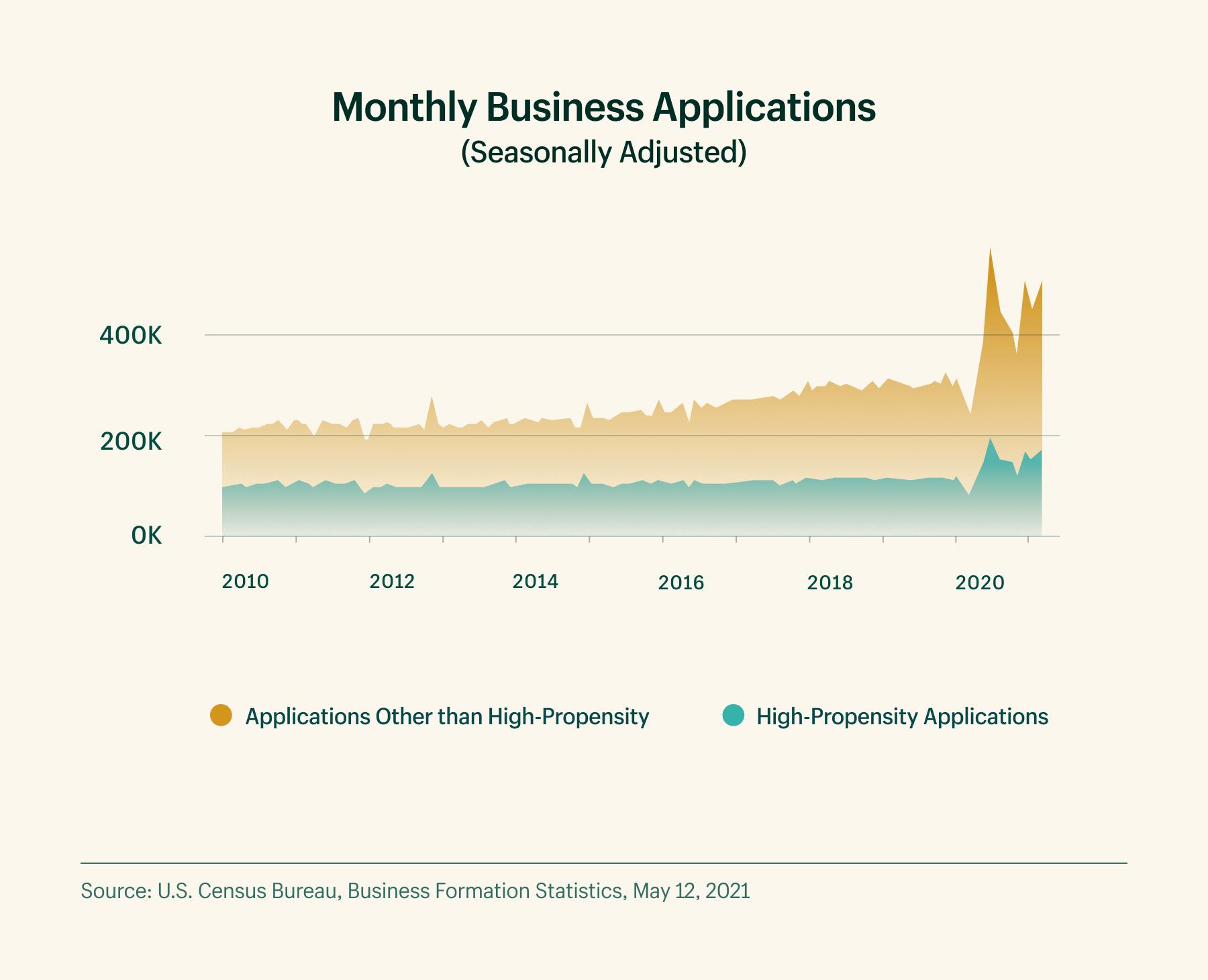 But entrepreneurship is still endangered. The baby boom has passed, and millennials are almost half as likely to start a business as those over 45. In many countries, population growth has slowed sharply. These demographic shifts play a part, but I have another theory.

Not so long ago, there were small-business opportunities in every town. Each neighborhood needed a butcher, a baker, a candlestick-maker. Then along came the big-box store, and everything changed. There’s less space for traditional entrepreneurship when big retailers dominate the physical and digital worlds.

There are other obstacles too. Many categories of entrepreneurship require licensing. In America, Mark Zuckerberg can start Facebook without asking, but can’t cut hair without government permission.

Liberty and the pursuit of happiness

I know how hard it is to start a business. It’s lonely. It’s fundamentally irrational. To para­phrase Brad Sugars, you work 100 hours a week to avoid working 40 hours a week for someone else. But that’s the beautiful thing about entrepreneurs. They don’t necessarily want to take over the world, just to carve out their corner of it. They’re reaching for independence.

The number one reason Shopify merchants love running their business is the freedom to make their own decisions. How many of us would want that kind of independence if it wasn’t so hard? Think about those who flocked to San Francisco in 1849. Was the Gold Rush really about gold? No, it was about the availability of opportunity. All you needed was a pick axe, and you were golden.

To preserve entrepreneurship, we need to make it easier. To retain vibrant cities and boost employment, every player—governments, banks, technology providers—needs to reduce friction for entrepreneurs.

We also need to expand our entrepreneurship definition beyond Silicon Valley stereotypes. Entrepreneurs include immigrants making ends meet for their families. When I came to Canada from Germany, I started an online snowboard store called Snowdevil because I couldn’t get a work visa. The software I built for this store eventually became Shopify. Despite declining entrepreneurship rates, immigrant-owned businesses in America have increased, from 14% in 2007 to 16% in 2016, according to the United States Census Bureau. Fully 45% of Fortune 500 companies were founded by immigrants or their children.

Entrepreneurs also include mothers who want more time at home. In our annual survey, 75% more females than males reported working from home as their primary motivation for starting a business. People who identified as a non-binary gender were four times as likely to become entrepreneurs because they couldn’t find employment anywhere else.

So much of the last few centuries’ progress was driven by entrepreneurs. They’re the ones we read books about, from Andrew Carnegie to Oprah Winfrey to Phil Knight of Nike.

Entrepreneurship is an age-old profession. We can’t let it fade away. We need more people in the garage, in the kitchen, in the evenings, making the world better for others and themselves.

The good news? We’re on the right track. Technology like augmented reality opens new entrepreneurship categories; starting a business is more accessible with new tech platforms; and the human desire for creative pursuits will grow as more jobs become automated.

For the first time in decades, entrepreneurship is on the rise—and we need to work together to help it thrive.

Tobi Lütke is an entrepreneur, programmer, and the co-founder and CEO of Shopify. A version of this article was originally published in The Economist’s The World in 2019.